I have never been a fan of romance novels. It always seemed like granny porn, something older women read to fantasize. At one time I would buy used romances based on the absurdity of the cover at a thrift store, read them with a group of my friends, and make fun of the passages. Nothing like hot, moist, loins ignited with the flames of desire to get us all into a good belly laugh. If we ventured beyond that we would poke fun at the horribly simplistic depictions of interactions between the genders. The men were always in a position of power, often some sort of misunderstood outlaw or unjustly vilified criminal and the women were always some sort of victim, either a hostage or a forced marriage or some sort of dilemma that implies subservience. At some point the female protagonist always attempts some show of defiance or independence in an attempt to remove herself from the situation at hand only to find that she is really in love with the man and thus succumbs to her fate proving that love makes everything better. Apparently, even Stockholm Syndrome.

Tell me this doesn’t send a message!

So why do so many women read these things? I think the bodice ripping romance has become the modern parable in that it reinforces for women the lessons we are taught as small girls about accepting rape culture. That’s a bold statement, I know, but hear me out. Remember being very young on a playground and a boy teases you, pulls your hair, pinches or hits you? Remember crying because either your feelings or actual body were hurt? Remember being told by an adult that the boy did that because he liked you? Remember thinking that made no sense at all? I’m pretty sure we all remember that.

This is probably our first indoctrination into rape culture. Being told to accept physical and emotional abuse from a peer as a sign of affection is ludicrous. If an adult woman said a man was hitting and belittling her we wouldn’t say it was because he loved her. We would tell her she deserves better and to get away from him. But little girls are taught to accept that kind of behavior and encouraged to do so with as little objection as possible. Not only does this encourage girls to internalize that boys will cause them pain if they are admired, but also that boys are not capable of processing emotions. Has anyone ever stepped back and thought about how insane this is?

This is just one big self-fulfilling prophecy. Boys will be boys is a permissive encouragement to young boys to continue to be more physical and less verbal in their expression. Not only does it give boys license to be more physical, it also discourages them from verbal expression. Additionally, it enforces a sense of male privilege in allowing boys to solve their problems by corporeal means. Girls are taught to accept this as not only a matter of course, but a compliment. They shouldn’t cry or make a fuss when they are hurt or bullied by boys. That’s just what boys do. It’s how boys express themselves. Girls need to learn how to change their instinct to protect themselves from assault, be it verbal or physical, because the nature of boys can’t be overcome. And that’s just the way it is. 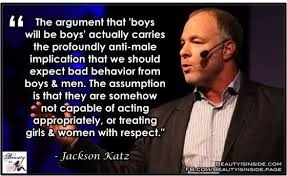 This belief is so pervasive in our culture that it is perpetuated without thought. Sure, we say things like “Use your words” and “Don’t hit girls” but we don’t really back that up. “Use your words” is for situations when being combative is frowned upon. Like the classroom or the grocery store, places even children know they have to fall in line. But once they are let loose on a playground, the natural habitat if you will, those rules no longer apply. “Don’t hit girls” is generally given to mean don’t hit them in anger. You can indeed use physical force to express your superiority, because boys will be boys after all. And children understand this, even if they can’t articulate it. They hear what we say and see what we do. They learn the lesson by witnessing who gets rewarded for what specific behavior regardless of what the rules are explained to be. They learn very early that the game is rigged.

Sooner or later people become more self-aware and gain critical thinking skills and the ability to question. Here is where the romance novel comes into play. It’s not alone and I don’t mean to get down on a single genre of writing. There are several cousins that assist romances in reinforcing the cultural code of male privilege and rape culture. Romantic comedies, fashion magazines, television, music, and on and on. There is always a subset that works towards sustaining the status quo. But the general form of the romance novel as stated earlier is simply that men are in positions of power, they take what they want, women will grow to like it, and it’s sold to us wrapped up as a love story. So how is that different from telling a five-year old he punched your arm and ripped the head off your doll because he likes you?