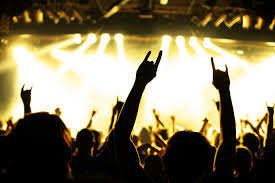 My friend, Sarah, and I went to a concert and uncharacteristically had to stand in the general admission “lawn” area. We much prefer getting as close to the stage as possible. However I will say that lawn seating offers a far better opportunity to people watch. Man, there are some nutty people out there. It struck me how there can be thousands of people in a stadium, all with one shared commonality; the music.  It’s always a bit surreal.
Our lawn experience was noteworthy for a few reasons. First, I was late. Work and traffic got me hung up and Sarah got there long before me. When we finally connected she had met some great people and found a good spot to watch the show. Cool! Standing adjacent to the cool people was the most socially awkward and highly intoxicated man I’ve encountered in some time. He was too loud, he stood too close, he had half conversations out loud and half in his head. He had that creepiness that sets off alarms in your hindbrain. His buddies ditched him and he thought we had a rapport. We didn’t. We left.
I hadn’t eaten all day and Sarah had been drinking her calories while waiting for me. Food was needed. It seemed fortune was with us as I found a line with only two people ahead of us. But then I blew it. I ordered the Portobello mushroom burger. It was on the menu but I don’t think anyone had ever ordered it before. It took forever to get it. Sarah went to the bathroom, ordered fries, and ate most of them before I got served. They were all probably in the back trying to find the mushroom and cursing me and all vegetarians. In the end it worked out perfect, I got my mushroom on a roll just in time to run up the stairs back to the lawn as the next set was starting.
There was a gap in the crowd that offered a great view of the stage. We were so enamored with our luck and intoxicated by the music that we didn’t stop to evaluate why such a prime piece of land would be open. It soon became apparent. There was a couple that was smoking the most vile smelling cigars. Now all cigars have a strong odor but what these people were smoking was so pungent it was nauseating. The cloud of smoke was being carried by the wind directly into the opening Sarah and I had claimed. Even the cigarette smokers had moved away. We attempted to move a bit forward, a bit back, smidgen to the left, then to the right in an attempt to elude the noxious cloud, but to no avail. Graciously a group of people moved so we could escape. Lesson: if it looks too good to be true, it is.
Men at concerts are always an interesting thing to observe. The veneer of machismo and stoicism seems to fall away and they display freedom of movement rarely seen in any other setting. I’m not implying that it is graceful, far from it, but there is something beautiful in watching them abandon cultural stricture and revel in freedom if only for a short time. The man in front of Sarah and I was experiencing such a moment.
He was with a woman and they had a blanket spread out on the grass. He really liked the music. He was having a great time with his air guitar moves. The problem was that from the back it didn’t look like air guitar as this gentleman didn’t realize that guitar usually involves one arm extended slightly to the side. No, he looked like he was performing a solo sex act. We weren’t sure if when the song ended he would applaud or ejaculate.