a woman having intellectual or literary interests

This was my Word of the Day a few days ago and I was struck by how absurd it is that the concept of women might have an interest in learning that there needed to be a word to describe the phenomenon. Let the historical research begin!

I discovered that it originated in mid-18th-century England basically because the girls were sick of their trite tea parties and wanted to do something more stimulating. Apparently, this term was used in the pejorative as it was frowned upon for women to be educated. Three women,  Elizabeth Montagu, Elizabeth Vasey and Frances Boscawen, decided they were tired of retiring while the gentlemen had port and stimulating conversation so they started the Bluestocking Circle.  It seems that women writers owe quite a bit to these ladies who encouraged woman writers of the day to publish their works. 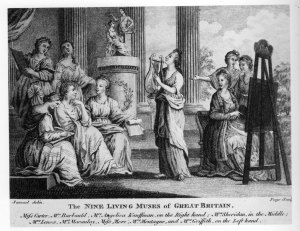 I had never heard of this, or of these pioneering women of the 1750. If you want to learn more you can read this book, and of course there are plenty available on Amazon and the ever-present Wikipedia page. Let’s pay homage to these groundbreaking ladies and take a few moments to learn about all they did to move women’s education and intellectual acceptance forward. It’s still not perfect, but it’s come a long way!